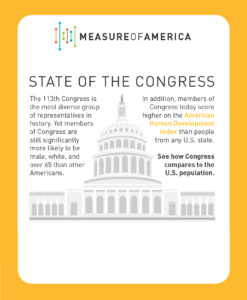 The 113th Congress is the most diverse group of representatives in history. Yet its members are still significantly more likely to be male, white, and over 65 than other Americans.[i] And in terms of basic well-being and access to opportunity, members of Congress are far ahead of the average in earnings and education but lag in life expectancy.

[i] National demographic characteristics are from the U.S. Census Bureau, Vintage 2011 postcensal population estimates. Demographic characteristics of the 113th Congress were derived from official member websites (see directory of House of Representatives’ official websites and directory of Senators’ official websites and the House Press Gallery, 2012 House Election Results website). Totals do not sum to 100 percent  for two reasons: 1. rounding; and 2. the population of other groups, such as Native Hawaiians and other Pacific Islanders, are extremely small.

[ii] The American Human Development Index (AHDI) value for the U.S. population is from The Measure of America 2013 (forthcoming). For the 113th Congress, the Index was calculated by Measure of America using the following sources:

EDUCATIONAL ENROLLMENT: Assumed to be the same as the value for the nation. For further details, see the Index Methodological Note. Please note however that Measure of America now calculates educational enrollment as the ratio of enrolled students ages 3 to 24 to the total student-age population ages 3 to 24.

[iii] Measure of America calculations using mortality data from the Centers for Disease Control and Prevention, National Center for Health Statistics and intercensal population estimates from the U.S. Census Bureau in collaboration with the National Center for Health Statistics (NCHS) through the CDC-WONDER on-line database. Estimates are for 2009.

[iv] Educational attainment figures for the U.S. adult population are from the U.S. Census Bureau, American Community Survey 2010. The educational attainment of members of the 113th Congress was compiled from official member websites reference above, from annual New Member Pictorial Directories, from the Washington Times and Washington Post candidate profiles and from the graduation records of colleges and universities attended by sitting members. Honorary degrees were not included.

[v] Licensed lawyers as a percentage of the adult population 25 and older in the U.S. is from the American Bar Association, “Lawyer Demographics 2012.” Licensed lawyers in the 113th Congress was compiled by Measure of America from sources including: official member websites referenced above, the U.S. House of Representatives Office of the Clerk, “Lawyers in the U.S. House of Representatives,” and New Member Pictorial Directories.