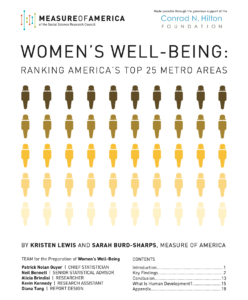 WHAT’S NEW IN THIS REPORT?

Women living in the country’s twenty-five most populous metropolitan areas account for one in every five Americans. Their well-being and access to opportunity is critical not just to them and their families but also to the prospects of the United States as a whole.

This large swath of the U.S. population is anything but a monolithic group. Yet while we often see comparisons between women and men as well as among different groups of men when it comes to earnings and education, less attention is paid to differences among women. This analysis shows that the well-being of women living in metropolitan America varies tremendously by place as well as by race, ethnicity, age, and martial status.

The analysis is built around the results of the American Human Development Index, a composite measure of well-being made up of health, education, and income indicators; the Index is expressed as a single number on a scale from zero to ten, and the data that make it up come from official government sources.

• Women in Washington D.C. earn the most money (median personal earnings: $37,700), and have the highest levels of education, with an American Human Development Index score of 6.8 (overall U.S. score: 5.03; overall U.S. women’s score: 5.0), better than residents of Connecticut, the state with the highest overall levels of well-being.

• Women in San Francisco, with an American Human Development Index score of 6.72, have the highest life expectancy, 84.5 years.

• In bottom-ranked Riverside-San Bernardino, with an American Human Development Index score of 4.54, one in five adult women never completed high school, and the typical female worker earns about $22,300 a year. Women here can expect to live 81.7 years.

The study finds that, on the whole, women living in major metro areas are doing better than the typical American woman. However, not all urban and suburban women have the same choices and opportunities; the study shows how basic indicators in health, education, and income intersect with other important factors, among them race, ethnicity, age, the opportunities of the marketplace, and marital status, to form a more complete picture of the critical factors that shape the ability of different groups of women to live freely chosen lives of value.