Home > HALVE THE GAP BY 2030: Youth Disconnection in America’s Cities

HALVE THE GAP BY 2030: Youth Disconnection in America’s Cities 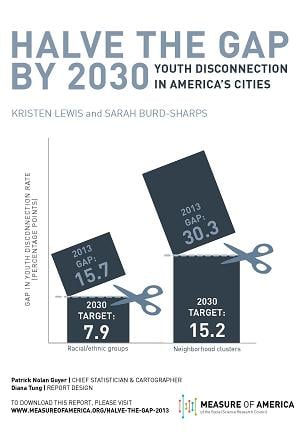 Once again, the back-to-school season has come and gone. High school and college students have settled into new routines, and recent grads have moved on to new roles. But an astounding 5.8 million teens and young adults between the ages of 16 and 24 are neither working nor in school. As their peers lay the foundation for a productive and meaningful adulthood, these disconnected youth find themselves unmoored from the structures that confer knowledge, skills, identity, and purpose.

Just over a year ago, Measure of America published its initial research on the epidemic of youth disconnection called One in Seven. This report updates last year’s findings with the latest numbers and, to better map the landscape of youth disconnection, also presents the data by neighborhood cluster for each of the twenty-five most populous US metro areas.

Key findings include the following:

In addition to painting a picture of youth disconnection in America today, in this report we imagine, in very specific terms, a different, better tomorrow. We lay out an ambitious but attainable goal: to halve the gaps between the most- and least-connected neighborhoods and between racial groups in half by 2030. Our research has convinced us that, through the collective efforts of educational institutions, social service delivery organizations, the justice system, the private and nonprofit sectors, and others, this objective is within reach. By coalescing around a shared goal, we can galvanize greater attention to the problem, mobilize more resources, and put in place a system of accountability for tracking our progress annually.

We firmly believe that setting measurable, time-bound targets for reducing youth disconnection is key to moving the needle on this critical issue. Knowing where you want to go is fundamental to getting there.