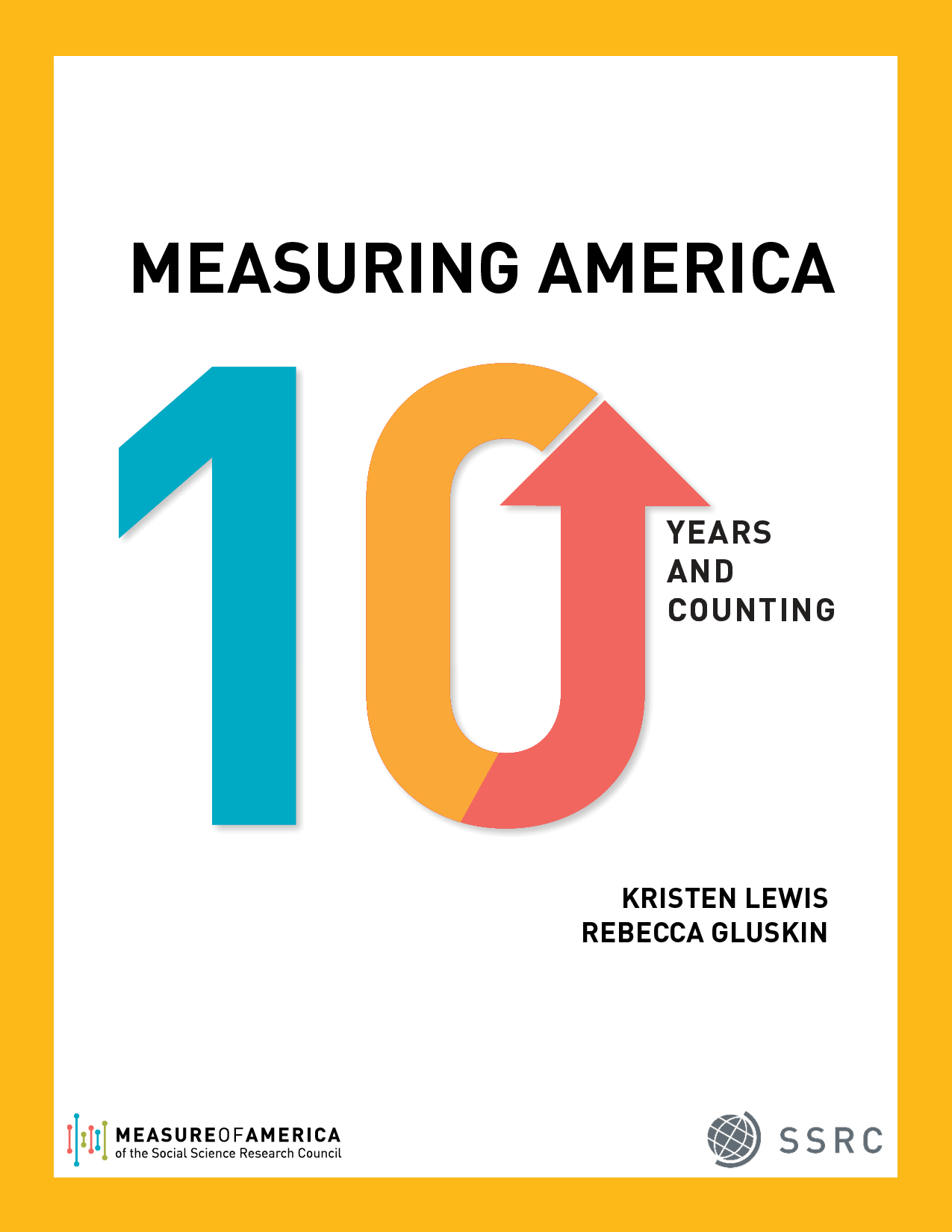 “Measuring America: 10 Years and Counting,” the latest update to the American Human Development Index by Measure of America (MOA) of the Social Science Research Council, moves beyond the overreliance on GDP as the primary measure of human progress and well-being in the U.S. MOA introduced the American Human Development Index in 2008, using official government data to create a composite rating of overall well-being based on health, education, and income, which enables comparisons over time and across race and ethnicity, place and gender. “Measuring America: 10 Years and Counting” explores trends in American Human Development Index scores over the past decade by race and ethnicity, gender, and U.S. state, revealing the uneven nature of America’s rebound from the 2007 financial crisis.

INCOME (Only component of the Index to decrease; white women experience biggest gain)

AMERICAN HUMAN DEVELOPMENT INDEX BY STATE (The Northeast is faring the best, Southern states are struggling)

“The decade following the Great Recession was the LatinX decade, with American Human Development Index gains among Latinas and Latinos outpacing all others,” said Kristen Lewis, director of Measure of America. “Measuring America: 10 Years and Counting” reveals that certain groups and places are surging ahead in terms of health, education, and income, the building blocks of a freely chosen life of opportunity and well-being, while others are treading water or falling further behind. These growing gaps in well-being are extremely costly to the U.S. as a whole, hurting our global economic competitiveness and cutting off opportunities for people to develop the capabilities they need to seize opportunities and that we will need as a country to meet the challenges of the global information economy.”

Reflections from our Stakeholders

“The American Human Development Index enables businesses, government, philanthropy and scholars to track inequality by gender, or race and ethnicity, illuminating areas for intervention and areas of improvement, analytic insights that can help everyone prosper. Measuring America: 10 Years and Counting mobilizes social science for the public good, which is the mission of the Council.”

“SSRC’s 10th anniversary ‘Measuring America’ report reveals both the need and power of intersectional analyses. We can no longer simply talk in blanket terms about race, ethnicity, class, gender and region since the American Human Index informs us that overall well-being varies at the intersections of multiple identities. The good news is that on average, some people’s lives are improving significantly. The regrettable news is that circumstances are still quite challenging for many others. Our society has much work to do to improve the welfare of its entire populace still; and this informative report provides some direction and necessary considerations.”

“A Portrait of New York City paints a rich portrait of a greater metropolis that is, on the whole, thriving, diverse, and befitting of its title as a global city. At the same time, the report reveals differences in human development by micro-location that sometimes rival those between nation-states. Luckily, it also offers a plan of action to improve the outcomes of all New Yorkers while reducing disparities.”

“As an executive steering committee member to the 100,000 Opportunities Initiative, we have seen how the coalition has benefited from using Measure of America’s data on opportunity youth to inform and focus our efforts in cities, communities, and zip codes facing significant youth disconnections rates. We know that we, alongside our collaborators in the 100,000 Opportunities Initiative, have been able to focus our resources and make a significant difference in connecting opportunity youth to employment opportunities with the help of Measure of America’s rigorous research and rich data.”

“This newer and smarter way of measuring well-being will allow us to understand how income, health and education all intersect to contribute to whether you and your community experience well-being or live at a great disadvantage. We knew there were grave disparities across the County, but now [with A Portrait of Los Angeles County] we have a more reliable way of geographically pinpointing the areas of greatest need.”

—Sheila Kuehl, LA County Supervisor and Board of Supervisors Chair

“A Portrait of New York City is exactly the type of local data-driven research that policy-makers and Community Board members need in order to make sense of complex demographic trends and make informed decisions to improve the life prospects of all New York City residents.”

“Ten years ago, as then Counsel to Wisconsin Senator Russ Feingold, I was first introduced to the first Measure of America National Report. I was intrigued and grateful then, as I am now, with the compilation of information that underpinned the state of our society with statistics that mattered. Information that accurately tells the stories about our health, education and well-being matter the most to us as policy makers and grant makers as we seek to steer resources to measurably improve the lives of our communities and our nation. The Measure of America continues to be a go to resource for every US policy and grant maker.”

“We knew the goal of our Reconnecting Youth Campaign – increasing federal funding for Opportunity Youth to provide one million reconnection opportunities per year—would be hard to achieve. So when we learned from the Congressional Management Foundation that 91 percent of congressional staff say it is helpful for advocacy organizations to give members of congress information about the impact that a bill would have on their district and state, yet only 9 percent say they frequently receive such information, we saw an opportunity to stand out from the crowd. Using data from Measure of America on the number of opportunity youth in each congressional district, we were able to provide members of congress detailed information about how increased funding would help young people in their specific district. The results: compared to FY17 levels, Congress invested $121M more in FY18 and $228M more in FY19. We, and the opportunity youth served, owe Measure of America a debt of gratitude for the important role they played in our campaign.”

“[A Portrait of New York City] from Measure of America brilliantly articulates the stark, profound, and disparate realities faced by New Yorkers depending on race, ethnicity, and neighborhood. The report also helps us understand that in order to have a New York City we can all be proud of we must work strategically and collectively to solve our most urgent problems.”

“‘Two Futures’ brings into focus the long-term struggles of a segment of the population that hasn’t received nearly enough attention: young people who lose a connection to two core institutions, the education system and the labor market, in the period of early adulthood. The report provides a warning signal that if we don’t pay closer attention to this crucial period of the life course the consequences of disconnection can linger on for decades.”

Measuring America: 10 Years and Counting was made possible by the generous support of the Conrad N. Hilton Foundation.