A Century Apart: New Measures of Well-being for U.S. Racial and Ethnic Groups 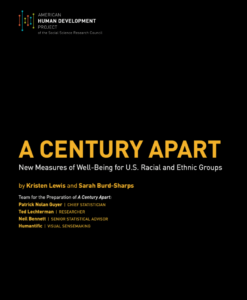 Our national conversation about race tends to take place in black and white, yet the greatest disparities in human well-being to be found in the U.S. are between Asian Americans in New Jersey and Native Americans in South Dakota. An entire century of human progress separates the worst-off from the best-off groups within the U.S., according to the latest update of the American Human Development (HD) Index.

What’s new in this report?

Although the numbers tell a sobering tale, this data can be the start of a conversation about where in the country different groups of Americans are thriving – and where others are falling behind – and why. A holistic approach using official statistics paints a picture of today and helps us monitor change for a better tomorrow; as such, the American HD Index can serve as a tool for action.