In the days before the launch, co-authors Kristen, Sarah and Eduardo made courtesy calls to the offices of a number of senators and representatives, particularly those in the bottom congressional districts and states, in order to share the report, explain the findings, and answer questions. 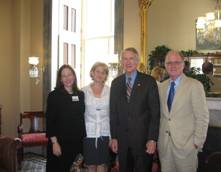