Invitation to Testify Before Congress, July 23, 2008

Just one day after the launch, the report’s authors were invited by Senator Charles Schumer of New York, Chair of the Joint Economic Committee, to testify at a hearing next week entitled “How Much More Can American Families Be Squeezed By Stagnant Wages, Skyrocketing Household Costs, And Falling Home Prices?”

Written testimony and a video of the hearing are available at: 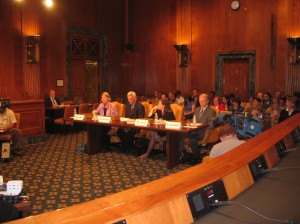