This blog post originally appeared in the Stanford Social Innovation Review on July 2, 2015. You can access the original article here.

For many young people, June is a month replete with excitement and promise. Graduating seniors toss their mortarboards skyward, college kids kick off summer jobs and internships, and newly minted college graduates join the working world in earnest. But for teens and young adults who have dropped out of school or failed to gain a foothold in the labor market, June, like the rest of the year, offers few encouraging opportunities.

These “disconnected youth”—young people between the ages of 16 and 24 years who are neither working nor in school—are unmoored from the jobs, training programs, and academic institutions that anchor and give shape to the lives of their connected counterparts. Absent the experiences and supports that school and work provide, disconnected youth struggle to acquire the skills and credentials they need to live rewarding, freely chosen lives as adults. Youth disconnection stunts human development, with adverse impacts on the affected young people themselves as well as on the economy, social sector, and criminal justice system, and in the political landscape.

According to our recent research, there are 5,527,000 disconnected youth in America today, or nearly 1 in 7 young adults (13.8 percent)—about as many people as live in Minnesota and more than the populations of 30 states. 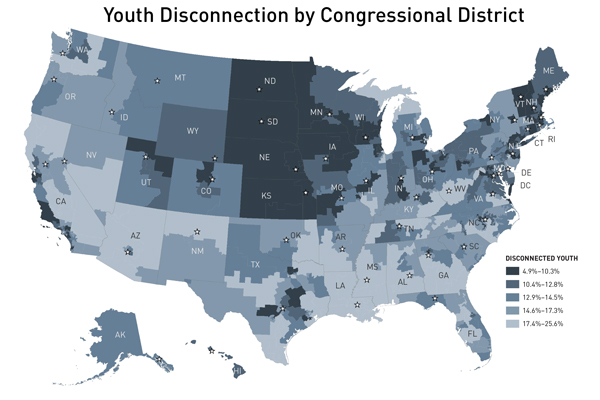 Though the rate of youth disconnection has fallen since the Great Recession (roughly 280,000 fewer young people are disconnected today than in 2010, the last decade’s peak), the numbers are still higher than pre-2008 levels. And even leaving aside the costs of wasted potential, our society spends billions each year on disconnected youth—a conservative estimate of just some of the direct financial costs tallies $26.8 billion for 2013 alone.

Among the 98 major metro areas we studied—home to two in three Americans—disconnection rates range from less than 8 percent in the Omaha, Nebraska, and Bridgeport, Connecticut, metro areas to more than 20 percent in greater Lakeland, Florida, Bakersfield, California, and Memphis, Tennessee. Nationally, youth disconnection rates for blacks (21.6 percent), Native Americans (20.3 percent), and Latinos (16.3 percent) are markedly higher than rates for Asian Americans (7.9 percent) or whites (11.3 percent). In nine metro areas, at least one in four black youth are disconnected; in 10 metro areas, at least one in five Latino youth are. Clearly, youth disconnection is a complex and highly variable issue. What can we do about it? 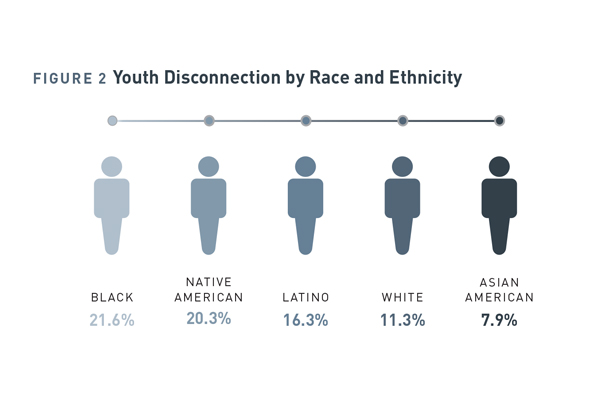 First, what won’t work: laying the problem at the feet of disconnected young people themselves and expecting them to solve it on their own. To alter the trajectory of his or her life, a young person needs perseverance, the optimism to envision a better future, and the willingness to work toward it. But disconnected young people face challenges far beyond what they can tackle through sheer willpower. Disconnection is not a spontaneously occurring phenomenon; it is an outcome years in the making. These young men and women tend to come from segregated, historically disadvantaged communities, and their struggles with education and employment too often mirror those of their parents and neighbors.

A meaningful starting point would be for cities to adopt the goal of cutting in half the wide gaps between racial and ethnic groups within their metro areas. In Chicago, for example, 17 percentage points separate the youth disconnection rates for blacks (24.5 percent) and whites (7.5 percent). Halving that black-white gap to 8.5 percentage points within five-to-seven years is an ambitious but achievable goal. Governments, businesses, schools, and nonprofits should join together to establish measurable, time-bound, tailored targets like this one, as well as blueprints for meeting them. Setting customized targets in metro areas across the country and working in concert across sectors to meet them would make the plight of these young people visible at a more local level while also moving the needle on the national problem.

America spends too much time, money, and effort fighting the consequences of youth disconnection—and too little preventing it. Long-term solutions that improve conditions in disconnected, opportunity-scarce communities, knit these communities into the fabric of the larger society, and create meaningful pathways to adulthood within them is the answer to youth disconnection. Easier said than done, we know. But all of our country’s young people deserve a meaningful shot at their own American dreams.