Home > One in Seven: Ranking Youth Disconnection in the 25 Largest Metro Areas

One in Seven: Ranking Youth Disconnection in the 25 Largest Metro Areas 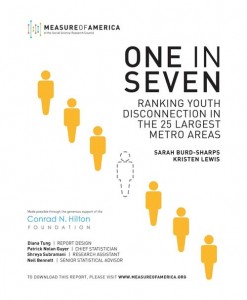 What’s new in this report?

An astonishing one in every seven Americans ages 16 to 24 is neither working nor in school—5.8 million young people in all. As their peers lay the foundation for a productive, fulfilling adulthood, these disconnected youth find themselves adrift at society’s margins, unmoored from the structures that confer knowledge, skills, identity, and purpose.

The cost is high for affected individuals—and for society as a whole. Lack of attachment to the anchor institutions of school or work at this stage of life can leave scars that last a lifetime, affecting everything from earnings and financial independence to physical and mental health and even marital prospects.  And last year alone, youth disconnection cost taxpayers $93.7 billion in government support and lost tax revenue.

This brief ranks the country’s 25 largest metropolitan areas as well as the nation’s largest racial and ethnic groups in terms of youth disconnection. Key findings include the following:

The report concludes with a set of recommendations for preventing youth disconnection, including moving beyond the “college-for-all” mantra to provide meaningful support and guidance both to young people aiming for a four-year bachelor’s degree and to those whose interests and career aspirations would be better served by relevant, high-quality career and technical education certificates and associate’s degrees.