Over the past five years, all 50 states and Washington DC and three-quarters of counties have improved on the Opportunity Index, an annual composite measure of 16 key economic, educational and civic indicators that expand or constrict access to economic mobility.

Yet, the 2015 Opportunity Index also reflects the nation’s uneven economic recovery. Millions of Americans are being left behind, including 5.5 million young adults, 13.8 percent of youth ages 16-24, who are disconnected from school and work. There are higher rates of poverty (+10.5%) and income inequality (+3.4%) and lower median family incomes (-4.2%) in 2015 than there were five years ago. 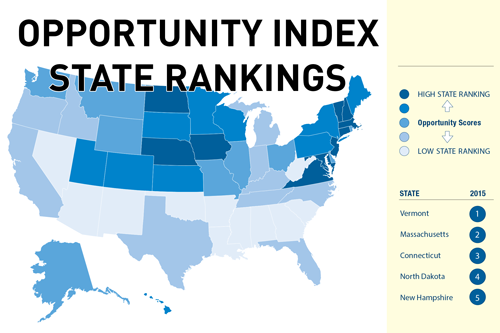