“In spite of gains, poverty and income inequality have increased over the past four years, and there are currently 5.6 million young adults ages 16-24 neither in school nor working.”

The 2014 Opportunity Index is a composite look at the states and counties that perform best and worst in terms of economic, educational, and civic factors that foster upward mobility; it also highlights the places that have improved the most since 2011, the first year the Opportunity Index was presented. This research is designed to help identify concrete solutions to expand opportunity to more Americans. 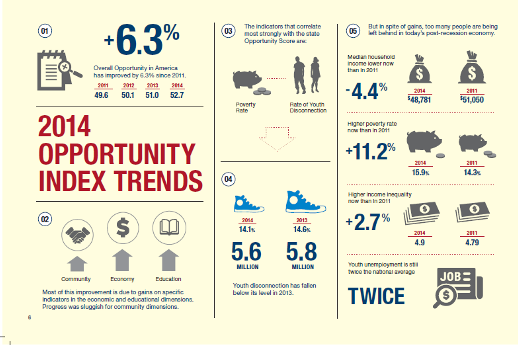 Opportunity is up 6.3% in the United States. In 2014, the overall Opportunity Score was 52.7 on a scale of 100, up from 49.6 in 2011. Most of this increase is due to improvements on specific economic and educational indicators (such as the unemployment rate, internet access, and on-time high school graduation rates); progress was sluggish on civic indicators such as volunteering, group membership, and access to healthy food.

The term “disconnected youth” refers to youth aged 16-24 who are neither working nor in school. 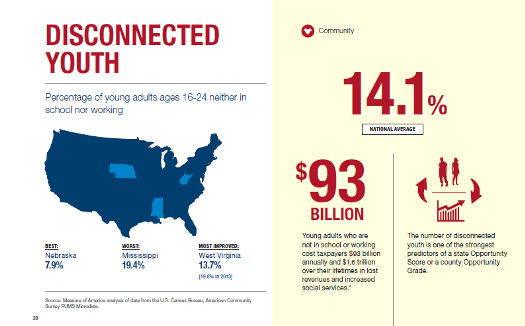 For the first time, the 2014 Opportunity Index release includes the actual number of disconnected youth at both the county and state levels (in addition to the percentage), to help communities understand more clearly the number of young adults that are disconnected from school and work.

INDEX 2011-2014 STATES
All states have improved their Opportunity Scores since 2011.

There’s a lot to talk about here… please Tweet Away!