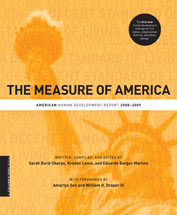 The Measure of America 2008–2009 is the first-ever human development report for a wealthy, developed nation. It introduces the American Human Development Index, which provides a single measure of well-being for all Americans, disaggregated by state and congressional district, as well as by gender, race, and ethnicity. The Index rankings of the 50 states and 436 congressional districts reveal huge disparities in the health, education, and living standards of different groups. Clear, precise, objective, and authoritative, this report will become the basis for all serious discussions concerning the realization of a fair, just, and globally competitive American society.

The Measure of America 2008–2009 provided elected officials and government agencies, nonprofit organizations, and community leaders in the United States a new and innovative lens from which to measure what matters: the human development framework. Human development is defined as the process of enlarging people’s freedoms and opportunities and improving their well-being. Human development is about the real freedom ordinary people have to decide who to be, what to do, and how to live. The human development concept was developed by economist Mahbub ul Haq. At the World Bank in the 1970s, and later as minister of finance in his own country, Pakistan, Dr. Haq argued that existing measures of human progress failed to account for the true purpose of development—to improve people’s lives. In particular, he believed that the commonly used measure of Gross Domestic Product failed to adequately measure well-being. Working with Nobel Laureate Amartya Sen and other gifted economists, in 1990 Dr. Haq published the first Human Development Report, which was commissioned by the United Nations Development Programme.

Central to the human development approach is the concept of capabilities. Capabilities—what people can do and what they can become-are the equipment one has to pursue a life of value. Basic capabilities valued by virtually everyone include: good health, access to knowledge, and a decent material standard of living. Other capabilities central to a fulfilling life could include the ability to participate in the decisions that affect one’s life, to have control over one’s living environment, to enjoy freedom from violence, to have societal respect, and to relax and have fun. Our capabilities are expanded (or constrained) by our own efforts and by the institutions and conditions of our society. People with extensive, well-developed capabilities have the tools they need to make their vision of “a good life” a reality. Those poor in capabilities are less able to chart their own course and to seize opportunities. Without basic capabilities, human potential remains unfulfilled.
The capability approach is a normative framework used for analyzing well-being, often employed to understand development problems. Although certain aspects of the approach can be linked to Aristotle and Adam Smith, it is philosopher-economist Amartya Sen and more recently, University of Chicago professor of law and ethics Martha Nussbaum, who are responsible for its development and proliferation. The core premise of the capability approach is that well-being should be defined by people’s real and actual opportunities to undertake the pursuits that they desire (often referred to as ‘capabilities to function’) – and through these freedoms, be whom they would like to be. One illustration of the difference between capabilities to function and formal freedoms is found in the area of educational opportunity. All US citizens have the formal freedom to earn a college degree. However when comparing students from low-income neighborhoods with more affluent students, low-income students’ real freedoms to attend college can be constrained by, among other things, low quality local high schools and financial considerations. Formal freedoms, in this and many cases, are necessary but not sufficient to provide true capabilities to function. The capability approach to well-being, which prioritizes the ability to actualize opportunity into ‘beings and doings’, contrasts with other theories of well-being which focus on subjective measures, such as happiness, or on material means, such as income.