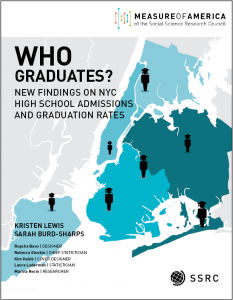 Beginning in 2016, Measure of America worked with the New York Times for nearly a year to develop a custom dataset that analyzes NYC high school graduation rates in a way that hasn’t been done before. Our original research informed a feature story that asked and answered important questions about school choice and how to ensure every student has access to the best education the city has to offer.

The on-time high school graduation rate for New York City public school students has risen every year for over a decade, a significant accomplishment of which the city should be proud. Yet startlingly wide graduation rate gaps exist between different groups of students. Virtually every ninth grader who entered high school in 2011 on the basis of a successful Specialized High School Admissions Test (SHSAT) graduated four years later; in contrast, fewer than six in ten students admitted to educational option programs graduated on time in 2015. To address these disparities, it’s essential to look beyond the marquee numbers to determine which students are graduating on time, which aren’t, and what can be done about it.

“Who Graduates?” uses a new dataset obtained by special agreement from the NYC Department of Education to look at high school graduation through the lens of types of high school programs students are admitted to.

The mandatory high school choice system is a complex, high-stakes process that roughly 80,000 New York City eighth graders must navigate every year in order to gain admission to high school. It requires all eighth-graders to rank their top 12 high school program preferences from over 700 programs in 400-plus public high schools. No neighborhood “default” option exists. Each program uses one of six admissions methods, which vary sharply in terms of competitiveness. This lens is critical because the high school choice process is hugely consequential for children and families. The report concludes that ensuring that our most able students get a good education, worthy goal that it is, is not enough. Average and struggling students also have the right to a high quality education; indeed, it’s in all of our interests to make sure they get it. 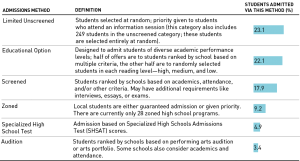 In addition, the following groups are at still higher risk of not graduating on time:

The school system cannot be expected to provide this support on its own; other city agencies, nonprofits, foundations, and businesses have important roles to play in addressing the myriad inequalities NYC families and neighborhoods face. A strong, safe, dynamic NYC depends on everyone having the skills they need to live productive, rewarding, freely chosen lives. Ensuring that more of our young people get their diplomas is good for all of us.