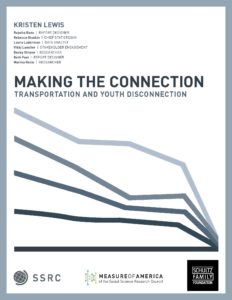 Since its peak in the aftermath of the Great Recession, the number of teens and young adults disconnected from both work and school in the United States fell for the seventh year in a row. The 2017 disconnection rate is 11.5 percent, a significant drop from the post-recession high of 14.7 percent in 2010. But a look into the latest data also shows some causes for concern. First, the decrease in the national disconnection rate between 2016 (11.7 percent) and 2017 (11.5 percent) was negligible. Second, for some groups, progress has halted or even reversed. The youth disconnection rate for black teens and young adults increased between 2016 and 2017. And despite years of decline in the country’s overall

disconnection rate, disparities between racial and ethnic groups persist. These findings indicate we cannot rely on economic growth alone to solve the problem of youth disconnection in America—societal factors such as poverty, discrimination, and residential segregation also play significant roles.

Making the Connection: Transportation and Youth Disconnection presents the latest available data on youth disconnection for the United States as a whole as well as disconnection rates by gender, race and ethnicity, region, state, and metro area. Determining who remains disconnected, and why, is vital to identifying interventions that will sustain or accelerate the positive trend we have observed over the past seven years. Because reducing youth disconnection will require an understanding of the structural factors driving it, the report also examines a key factor preventing young people from staying in school and the workforce: disparities in access to reliable and affordable transportation. Future reports will address additional structural barriers fueling disconnection.

Through our research and engagement with stakeholders over the years, we have learned in greater detail about the challenges related to youth disconnection, as well as what works in addressing them. Though they overlap, these challenges and related recommendations can be organized into four very general buckets: confronting historical and intergenerational disadvantage, especially racism; supporting vulnerable youth; keeping youth connected; and reengaging disconnected youth. Read about challenges and recommendations here.

“Since its first report on the topic in 2012, Measure of America has provided rigorous and informative analysis of the experiences of this significant youth population.This report exemplifies the SSRC’s commitment to research that advances the public good and informs public debate.”

“At the Schultz Family Foundation, we believe every young person has the potential to succeed, and we’re committed to using research and data to inform both our efforts and the larger field of practice. Today’s report from Measure of America reinforces the importance in investing in this next generation of young people.”

“Young people are the future of America. This could not be any clearer based upon the Measure of America work and report. Bias against any racial, ethnic or regional group that impedes the growth and development of this crucial segment of America’s population is not only cruel and unfair; it threatens the future social and economic prosperity and well-being of the nation. We must do all we can to make sure that all of America’s youth stay connected and committed to the future development and growth of America. It is not only the right thing to do, it is the smart course of action for our nation’s leaders.”