Home > A Decade Undone: Youth Disconnection in the Age of Coronavirus

A Decade Undone: Youth Disconnection in the Age of Coronavirus 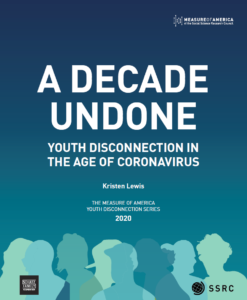 The number of teens and young adults disconnected from both work and school in the United States fell for the eighth year in a row, from a recession-fueled high of 14.7 percent in 2010 to 11.2 percent in 2018. The Covid-19 pandemic will cause youth disconnection rates to spike dramatically. We estimate that the number of disconnected youth will easily top six million and could swell to almost one-quarter of all young people. With students physically disconnected from schools and unemployment the highest it’s been since the Great Depression, young people with the fewest resources will be left even further behind their peers and face the highest barriers to reconnection. While it is clear that young people of all stripes will suffer, low-income people of color will be the hardest hit.

Despite overall improvements in the youth disconnection rate over the last decade, the gaps between racial and ethnic groups

persisted and will be exacerbated by Covid-19. In addition, striking disparities between different geographies within the US remained. Even in economic boom times, vulnerable young people needed far more support, and in the face of Covid-19, their needs have grown.

A Decade Undone: Youth Disconnection in the Age of Coronavirus, written in the months before the pandemic, presents youth disconnection rates for the United States as a whole as well as by gender, race and ethnicity, region, state, metro area, county, and congressional district. For the first time, we also present disconnection rates for each of the country’s roughly 2,400 public use microdata areas (PUMAs), a Census Bureau-defined geography of at least 100,000 people. Using data by PUMA, we introduce a new community typology that highlights the distinct characteristics of the country’s urban, suburban, and rural areas and explores how they affect youth disconnection rates. These pre-coronavirus numbers create a map of vulnerability; they highlight where disconnection rates were already highest and therefore where the situation today is most precarious.

Because this is an election year, A Decade Undone also delves into the relationship between political participation and youth disconnection with a state-level analysis of voter turnout and disconnection rates. 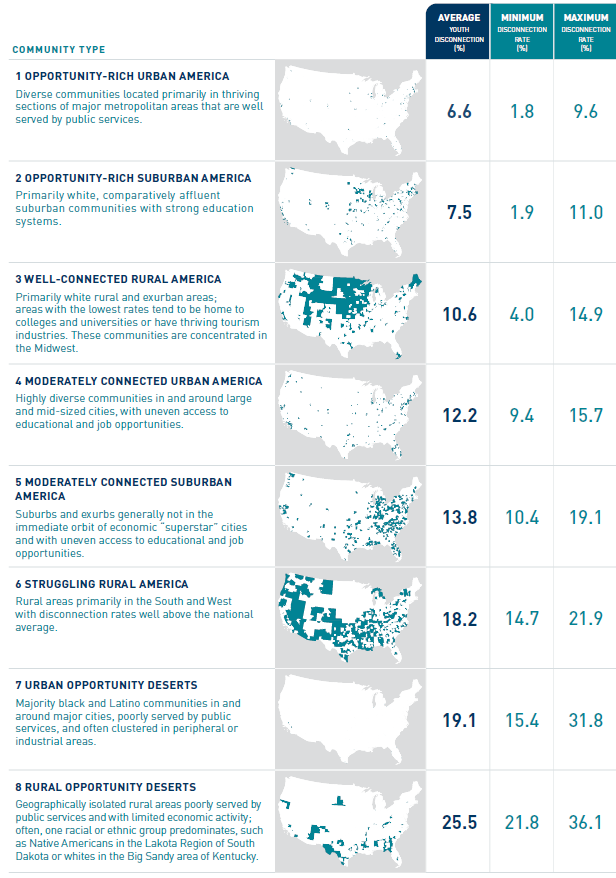 Covid-19 has likely erased ten years’ progress in reducing the national youth disconnection rate in a matter of months. It is difficult, at the height of the pandemic, to make recommendations for a future whose landscape we cannot yet divine. Nonetheless, a few things are clear. The 2020 youth disconnection rate will spike, and disconnected youth and their families will be hit the hardest. Read about challenges and recommendations here.

“Mobilizing knowledge for the public good is the core mission of the SSRC,” said Alondra Nelson, president of the Social Science Research Council. “Now more than ever, as we struggle to understand and address the interlocking crises of persistent disadvantage, the disproportionate impact of Covid-19 on people of color, and our tragic history of police brutality against Black people, research like this that illuminates the nature and extent of inequalities among America’s teens and young adults is critical.”

—Alondra Nelson
President of the Social Science Research Council
Harold F. Linder Chair in the School of Social Science at the Institute for Advanced Study
Visiting Lecturer with the Rank of Professor at Princeton University

“Measure of America’s reports on youth disconnection are indispensable reading for anyone who wants to understand this key public health issue. Their latest release, “A Decade Undone: Youth Disconnection in the Age of Coronavirus,” contains several excellent new features. These include youth disconnection calculations at a fine-grained level based on approximately 2,400 public use microdata areas (PUMAs), a novel way of characterizing urban, suburban, and rural communities, and associations of youth disconnection with youth voter turnout. The report frames findings from analyses of 2018 data in the context of the 2020 global pandemic and its devastating impacts on youth connections to education and employment. I know I’ll be turning to this critical resource again and again.”

“Even before the COVID-19 crisis, disconnected youth were at a higher risk of poor health and economic outcomes as compared to their peers. Unfortunately, the pandemic has further widened the divide for an already vulnerable community. Now more than ever, measuring and tracking disconnection rates is critical to informing our work to continue to keep young people at the forefront of opportunity.”

This report is made possible by The Schultz Family Foundation. The Schultz Family Foundation partners with like-minded businesses and community-based organizations to build a new approach to youth development and economic mobility. Through our Opportunity Youth initiative, we forge unique partnerships and invest in clear pathways to employment. By focusing on both traditional and innovative programs such as mentorship, access to housing, job readiness and community connections, the Foundation helps close the opportunity gap for these young people so they, in turn, can build communities and families that prosper into the next generation.