Home > A Disrupted Year: How the Arrival of Covid-19 Affected Youth Disconnection

A Disrupted Year: How the Arrival of Covid-19 Affected Youth Disconnection 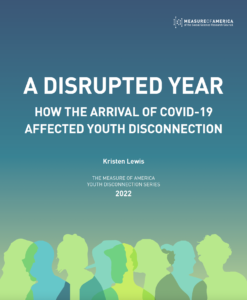 On the eve of the Covid-19 pandemic, the number of teens and young adults disconnected from both work and school in the United States was lower than it had been in over a decade. Between 2010 and 2019, the youth disconnection rate fell 27 percent, driven largely by the steady increase in youth employment in the years following the Great Recession. The 2020 national youth disconnection rate is 12.6 percent, or 4,830,700 disconnected youth—an upward spike that reverses a decade-long trend of falling rates. The rate increase signals a Covid-fueled reversal of the decade-long decline in the share of the country’s young people neither working nor in school. In addition, due to Covid-related data challenges, the report argues that this rate is likely an underestimate of the true extent of disconnection in the first year of the pandemic; in other words, the youth disconnection rate for 2020 is at least this high and very likely higher.

A Disrupted Year: How the Arrival of Covid-19 Affected Youth Disconnection is the latest in Measure of America’s series of annual reports on teens and young adults ages 16–24 years who are neither working nor in school, a group referred to as disconnected youth or opportunity youth. The youth disconnection rate is a vital metric of access to opportunity and societal well-being. People acquire skills, credentials, habits, and experiences fundamental to a rewarding, productive, and joyous life during their teens and early twenties. The youth disconnection rate thus tells us which young people in our society have the chance to lay the groundwork for freely chosen, flourishing lives and which groups face serious challenges in the transition to adulthood. Research shows that being disconnected as a young person has long-term consequences; it’s associated with lower earnings, less education, worse health, and even less happiness in later adulthood. Determining who remains disconnected, and why, is vital to identifying strategies and interventions, especially in the wake of the Covid-19 pandemic.

The Covid-19 pandemic continues to pose countless health, educational, and economic challenges. The events of 2020 deprived America’s young people of a host of experiences that would have allowed them to build the capabilities required to live flourishing lives as adults. In addition, the burden of the Covid-19 pandemic has fallen disproportionately on low-income communities of color, which are also disproportionately home to the highest rates of youth disconnection.

A Disrupted Year presents 2020 youth disconnection rates for the United States as a whole as well as by gender, race and ethnicity, region, state, metro area, and congressional district. The report also offers recommendations on how to better serve out-of-school and out-of-work young people.