This blog post originally appeared in SSRC’s Items on March 20, 2018, and is part of a series of reflections on A Portrait of LA County. You can access the original article here.

By: Kristen Lewis and Sarah Burd-Sharps

We first want to give our sincere thanks to Jennifer Lee, Pedro Noguera, and Kelly Lytle Hernandez and Terry Allen for taking the time to provide commentary on Measure of America’s recent report, A Portrait of Los Angeles County. We are grateful that these leading thinkers were willing to engage with the report and share their views about it. Their reviews come at an ideal time; we are nearing the final stretch of our next report, A Portrait of New York City, and they will see some of their suggestions reflected in it.

Measure of America and human development

Before addressing the three reflections, we want to summarize the conceptual basis for Measure of America. We started Measure of America in 2007 (now a program of the Social Science Research Council) to champion in the United States an idea, human development, that is well-known internationally and has broadened the way in which we understand, measure, and track people’s well-being. This concept incorporates strictly economic metrics, like GDP, but also measures other things—besides money—that expand our choices, opportunities, and freedoms. Over the last decade, we’ve produced several national, state, and local reports, a suite of online tools, and work in the area of youth disconnection. We’ve done quite a bit of work in California over the years, producing two volumes of A Portrait of California (published in 2011 and 2014), as well as human development reports on Sonoma and Marin Counties. This report, A Portrait of LA County, builds on its predecessors and uses the same human development approach and methodology.

The concept of human development puts people at the center of analysis and considers how political, social, environmental, and economic forces interact to shape the range of choices open to us. It is the process of enlarging people’s freedoms and opportunities and improving their well-being, which is expanded or constrained by the things we do and by conditions and institutions around us, from our family situations to our neighborhoods. At its heart, human development is about what regular people can do and be in their lives. The idea draws heavily on the work of Nobel Laureate Amartya Sen, using his capabilities approach as a conceptual framework. MOA’s American Human Development Index (and UN Human Development Index upon which it is based) measures just three basic human development areas: a long and healthy life, access to knowledge, and a decent standard of living.1 People the world over generally see these areas as the three key building blocks of well-being and access to opportunity.

A Portrait of Los Angeles County seeks to explore these questions on human development in the nation’s most populous county, and is the result of a collaboration between Measure of America and over eighty representatives from foundations, governmental, and nongovernmental institutions.2 In addition, the project had the financial support of the LA County Quality and Productivity Commission. It was the first time we had worked with such a large collection of stakeholders on a report of this nature, and the report’s content and focus on timely LA issues was immeasurably enhanced by their inputs.

In the Portrait, we presented American Human Development Index scores for:
• 106 cities and unincorporated areas in Los Angeles County
• the thirty-five community plan areas within the City of Los Angeles
• major racial and ethnic groups, as well as Asian American and Latino subgroups
• women and men
• US- and foreign-born LA County residents


Scores for the 106 cities and unincorporated areas of LA County ranged from a high of 9.43 in San Marino to a low of just 2.44 in Florence-Graham. This seven-point difference is larger than the range among the country’s 435 congressional districts. A resident of San Marino can expect to live an average eight-and-a-half years longer than a resident of Florence-Graham. Following the same pattern, a San Marino resident is sixteen times as likely to hold a bachelor’s degree, as well as have a median income of $77,948 compared to a Florence-Graham resident (with a median income of $18,405).

One innovative feature of the report is the “Five Los Angeles Counties” framing. The Five Los Angeles Counties were created by grouping cities and places not by geography or by the standard categorization of income, but by their scores on the 10-point American Human Development Index scale. Grouping communities according to their American Human Development Index score highlights striking differences between the different LA Counties, but also provides a useful tool for looking at what neighborhoods and cities separated by distance have in common. 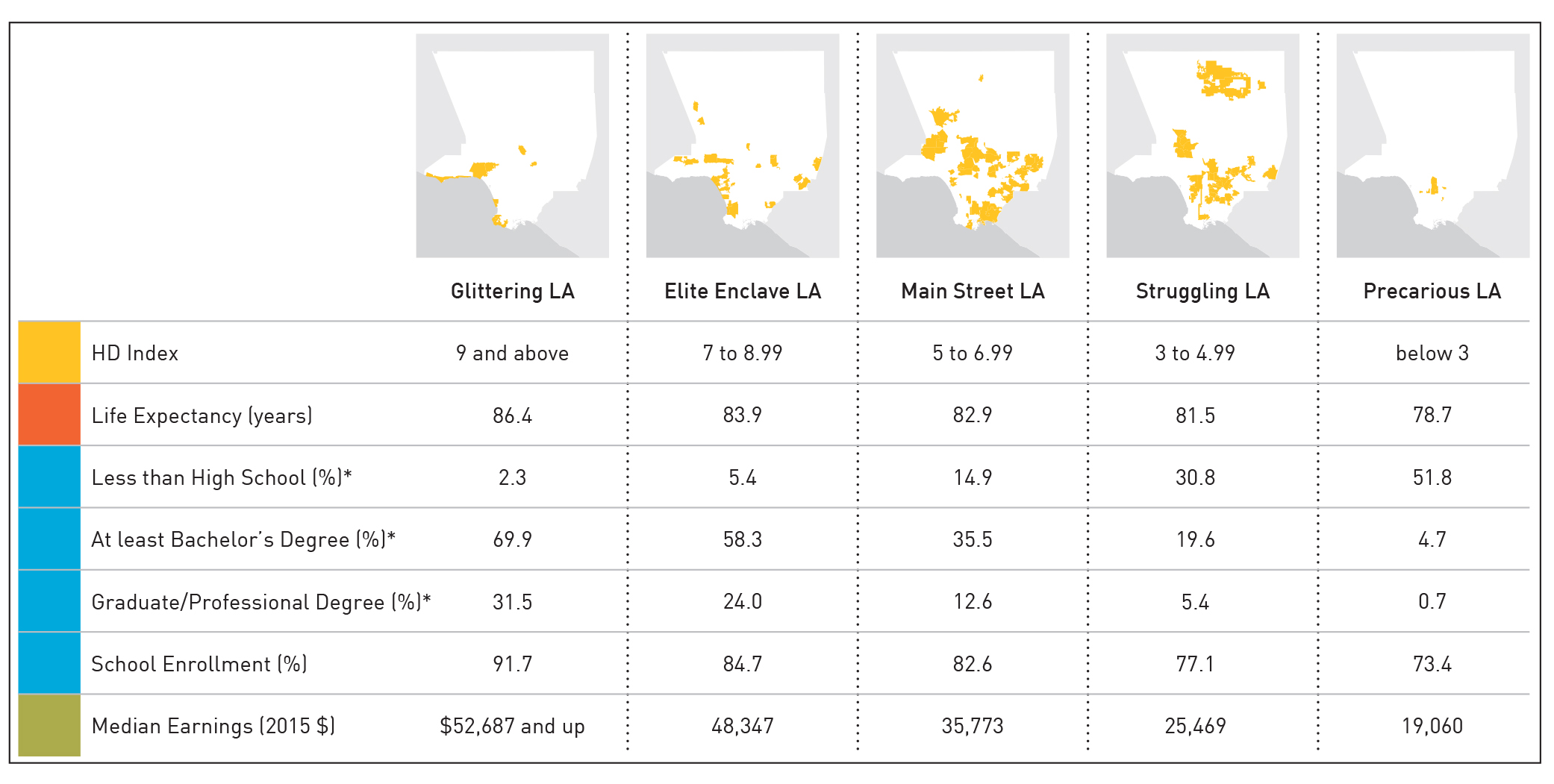 Listening to the responses

Turning to the commentaries, Jennifer Lee’s book, The Asian American Achievement Paradox, was central to our understanding of educational outcomes among Asian Americans and Latinos in Los Angeles County and informs our current work for A Portrait of New York City. Lee elegantly answers the question of why Asian American children, even those of poor immigrant parents, have better educational outcomes than Latino children of immigrants in Los Angeles by drawing our attention to their wildly divergent starting positions on the educational ladder. The 1965 immigration reforms brought an influx of well-educated Asian immigrants to LA. This social capital (highly educated parents) combined with institutions and practices (like after-school and weekend learning and test-prep centers) positioned second-generation children to succeed in school, even if their parents had low incomes due to language barriers or difficulties transferring their home-country educational credentials to the United States. There was tremendous interest among our partners in data calculations and analysis about Asian subgroups with a view to looking beneath the broad Asian racial category at the strikingly different well-being outcomes within it. Using disaggregated data obtained from the California Department of Public Health and the US Census Bureau, our analysis of the ten largest subgroups revealed that Indians have the highest HD Index score (9.10) and Cambodians the lowest (5.17).

Pedro Noguera raised some concerns in his response about insufficient attention to the connections across boundaries in Los Angeles County, both geographic (between high- and low-scoring areas of the county) and sectoral (between transportation, housing, and education). One of the great strengths of the human development approach and index is a holistic framing that encourages us to look at issues in the interconnected ways in which people experience them rather than as siloed problems requiring separate solutions, and so we were surprised that this did not come out clearly in his reading. We strongly agree that both communities and sectors are interconnected, that the road to a better future runs through a deeper understanding of our shared challenges and shared fates, and that convincing “Glittering” and “Elite Enclave LA” to care about and invest in “Precarious” and “Struggling LA” is imperative to everyone’s well-being in the long run. We share Noguera’s view that, left unchecked, the county will “find itself on an unsustainable path if many of the economic and social trends identified in the report are not addressed.” We would argue that LA is already firmly on, and rather far down, that path, in fact. However, as Noguera argues, we could have made these points more forcefully and will be more explicit about them in the future.

One example of how we hope the Human Development Index will be used is the commentary of Kelly Lytle Hernandez and Terry Allen, who pair it with other data as a way to connect issues and explain the “why” behind the index score. They gathered additional data, research, and analysis on incarceration rates, trends, and policing in LA County, creating a new category, “Caged LA,” and combined their data with that on “Precarious LA” and “Struggling LA.” We are incorporating the question of incarceration and who shoulders its costs into the “Five New Yorks” framing that will be part of the upcoming A Portrait of NYC. The greater New York results are similar to the LA results, with incarceration a normalized experience in the neighborhoods of “Precarious New York” and for all practical purposes utterly absent from life in “Gilded New York” (the East Coast equivalent of “Glittering LA”). Overall, these rich commentaries remind us that while the Human Development Index score shines a light on where a community or demographic group falls on the well-being continuum, it is only the start rather than the end of the conversation.

1 The index combines a small set of indicators—life expectancy, educational degree attainment and enrollment, and median personal earnings—into a single number that falls on a scale from zero to ten, ten being the top score. We then disaggregate the population by geography and by demographic group.

2 Measure of America collaborated with fourteen local philanthropic foundations, the Southern California Grantmakers, and three Los Angeles County departments: the Office of Child Protection, the Department of Children and Family Services, and the Department of Public Health.