A Portrait of California 2011 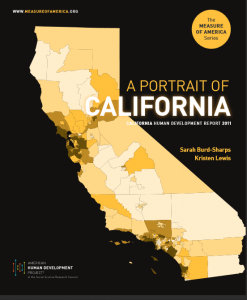 A Portrait of California goes beyond the state’s fiscal and budgetary woes to examine the well-being of its people using the American Human Development Index, a measure based on official government data in health, education, and living standards. This timely report introduces the ‘Five Californias’ to highlight the varied opportunities open to differing segments of the population, and provides close-up snapshots of major metro areas. The report also ranks native-born and foreign-born residents for each major ethnic group, as well as all 233 Census neighborhoods in the state. The report concludes with recommendations aligned with current fiscal realities for protecting and building upon human development successes already in place.

A Portrait of California highlights actions that Californians can take to lock in human development successes today while setting the stage for significant budget savings and improved well-being tomorrow. These include investing in public health campaigns and food subsidies for fruits and vegetables; investing in preschool and targeting the worst performing high schools with the highest dropout rates; and taking steps to address gender equality and wage discrimination in the workplace.