Two Futures: The Economic Case for Keeping Youth on Track 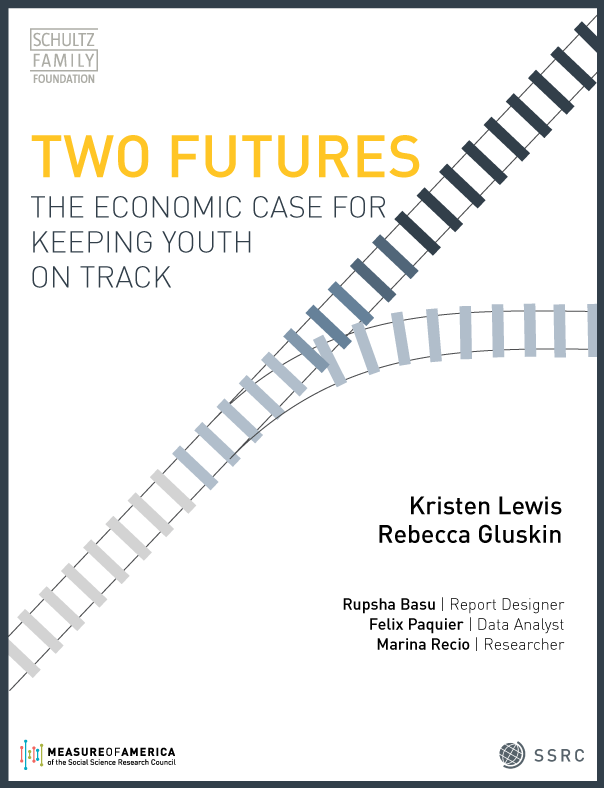 Disconnected youth, also called “opportunity youth,” are teens and young adults ages 16 to 24 who are neither working nor in school.

Given the difference in earnings between the connected and disconnected, Measure of America estimates that the federal government would eventually gain, on average, $11,900 per year in additional tax revenue for each young person who remains connected. That adds up to roughly $55 billion in potential federal revenue gain per year when multiplied by the 4.6 million teenagers and young adults ages 16-24 who are neither in school nor working. Two Futures also goes further to estimate the potential economic gain of reconnecting young people in four cities—Atlanta, Dallas, Los Angeles, and Washington, DC—factoring in tax revenue, public health and housing assistance, and justice costs.

The report makes the case that investing in early-career workers can provide positive returns, laying out the following agenda for action:

“Deploying state-of-the-art longitudinal data, Two Futures sounds the alarm on the disconnected youth in our society.  The report shows that a lack of integration into school and the world of work during the critical period of ages 16 to 24 evinces enormous personal and societal costs that persist for decades.  The effects of (dis-)connection persist even when comparing adolescents and young adults from families with the same income level and demographic characteristics.  That is, a disconnected youth will suffer an earnings penalty of over $30,000 per year in middle adulthood as compared to someone who came from a family with the same income but who was in school or working those critical, transitional years to adulthood.  Luckily, Two Futures goes beyond diagnosing the problem and lays out solutions that the private and public sectors can pursue so that American can make maximal use of its human capital in this era of global competitiveness.” -Dalton Conley

“Two Futures” brings into focus the long-term struggles of a segment of the population that hasn’t received nearly enough attention: young people who lose a connection to two core institutions, the education system and the labor market, in the period of early adulthood. The report provides a warning signal that if we don’t pay closer attention to this crucial period of the life course the consequences of disconnection can linger on for decades.” -Patrick Sharkey