Youth Disconnection Rates Highlight Structural Barriers to Achievement in the US

This blog post originally appeared in SSRC’s Items on April 3, 2018. You can access the original article here.

Youth disconnection—the rate of young people ages 16–24 who are not in school or working—is a strong indicator of a community’s collective capabilities and a telling gauge of its residents’ access to opportunity. The consequences of youth disconnection reverberate through communities and society as a whole: a labor force with too few skilled workers to fill entry-level jobs, which require greater skill than entry-level jobs a generation ago, much less to compete in today’s global economy; greater need for public assistance of all sorts; higher rates of crime and incarceration, which have high personal and societal costs; poor physical and mental health, costly in both human and financial terms; and a heightened risk of poor outcomes for the next generation.

Measure of America’s newest report on youth disconnection in America, More than a Million Reasons for Hope,11 shows that in 2016, a total of 11.7 percent of young Americans were disconnected, an improvement from the 2015 rate of 12.3 percent, and a 20 percent decrease from the 2010 peak rate of 14.7 percent, in the aftermath of the Great Recession. Yet 4.6 million young people remain out of work and out of school. This overall improvement is cause for celebration, and underscores the importance of a thriving economy, but a deeper look at the data by race and ethnicity shows concerning trends—particularly the gap between Asians and whites on one hand and Latinos, blacks, and Native Americans on the other—pointing to structural problems in society that economic growth alone cannot solve.

Understanding the dynamics of this population matters. Emerging adulthood—that intense, exciting, and sometimes overwhelming period when our adult selves start to take shape—is a pivotal time in life. For connected young people, it is a time marked by positive firsts: the giddy thrill of hopping behind the wheel of the family car for that first solo spin, the pride of high school graduation, the sense of agency that comes with a first paycheck. Disconnected young people are robbed of these critical and affirming experiences. The limited education, social exclusion, lack of work experience, and minimal professional networks that are part and parcel of disconnection have long-term consequences that snowball through the years, affecting a range of well-being outcomes, from earnings and self-sufficiency to physical and mental health to relationship quality and family formation. 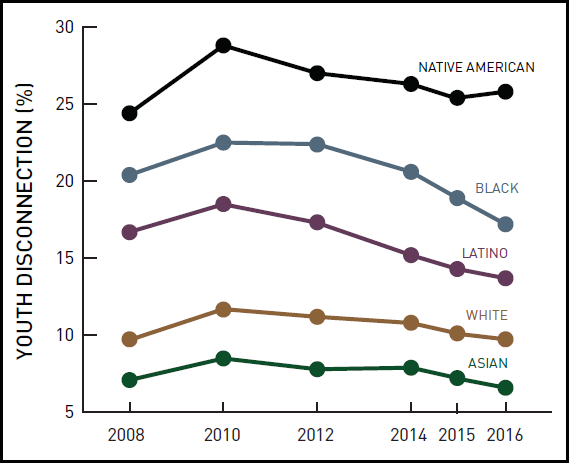 If disconnection rates are on a steady decline as the economy has expanded since 2010, isn’t that enough to suggest the trend will continue, and demonstrate that more and more young people are on their way to achievement? As we’ll explore further, there are a number of reasons to believe that depending on economic growth alone will not fully address the remaining gaps between racial and ethnic groups. Deep structural barriers to equitable advancement have existed for generations—particularly for blacks and Native Americans in the US—including the historical and continued discriminatory policies and practices present in the health and criminal justice systems as well as in the labor and housing markets. This structural racism pervades institutions and policies that in turn reinforce discriminatory beliefs and the distribution of resources. Acknowledging the ways in which the de jure racism of the past continues to cast its shadow into the present and developing programs that address racism explicitly will be needed to improve outcomes for young people of color. We are doubtful that economic growth alone will overcome these structural barriers for three reasons.

First, we’ve been studying youth disconnection since 2012 and the racial gap has been apparent nationally for all years of data we’ve analyzed, as well as in nearly every region, state, metro area, and county for which we have sufficient data to calculate it by race and ethnicity. Dividing the country regionally, blacks are faring best in the Northeast, with a 16.8 percent youth disconnection rate, which is still significantly higher than the region where whites are most disconnected (the South, at 11.2 percent). There are glimmers of hope where gaps have narrowed for some—for instance, Latinos have made the most progress in closing the gaps (from 18.5 percent in 2010 to 13.7 percent now)—but the disparities remain obvious and damaging. 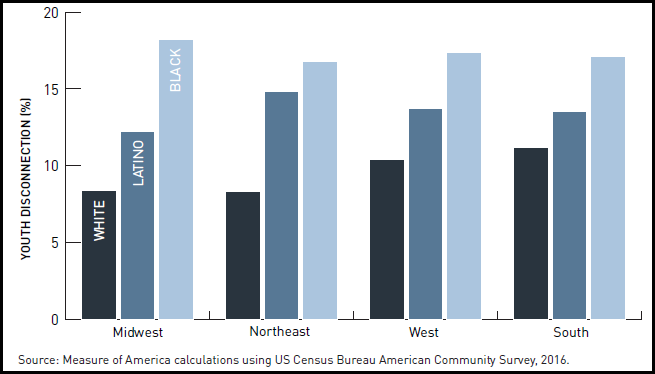 Second, black, Latino, and Native American young people are particularly disadvantaged in ways that exacerbate their potential for disconnection.

• Poverty. Youth disconnection is strongly associated with poverty. Young people growing up in poverty face a range of challenges, such as residential segregation, poor-quality schools, inadequate transportation, worse health outcomes, greater exposure to neighborhood crime and violence, and more adverse childhood events. These challenges make it more difficult to thrive in school and create barriers to employment (for example, criminal histories, lack of academic accreditation). For certain groups, such as disconnected young women who are black as well as disconnected young women who trace their heritage to the Spanish-speaking Caribbean, the poverty rate approaches 50 percent.

• Parenthood. Nearly one-third (31.2 percent) of disconnected Latinas are mothers. When connected, Latinas are less likely to be mothers than black and Native American girls, but once disconnected, they are by far the most likely.

• Education. Staying connected to school appears to be a disproportionate challenge for Latino youth. Previous MOA research2 found that Latino young men were as likely as white and more likely than black young men to be employed, but less likely than either to be enrolled in school. A third of disconnected Latino males did not complete high school—the highest rate of any group of disconnected young people. Among disconnected girls, Latinas are the most likely to have dropped out of high school (29 percent), followed closely by Native American girls and young women (28.5 percent).

Lastly, black young men face particularly high rates of youth disconnection, regardless of family income. Our study launched on the same day as the most recent research from Raj Chetty et al. on the black-white gap in upward mobility, Race and Economic Opportunity in the United States: An Intergenerational Perspective. 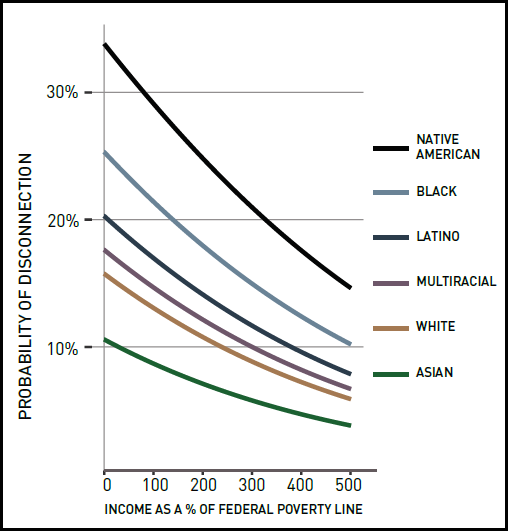 In Measure of America’s 2015 report, Zeroing In on Place and Race, we found that the more racial segregation that exists in a metro area, the higher the level of youth disconnection for blacks and the lower the rates for whites. In other words, concentrated residential segregation by race and ethnicity within major metropolitan areas has very negative impacts for black teenagers and young adults, who are more likely than whites to live in low-income neighborhoods with historically under-resourced schools and transit systems, less access to employment, and weaker social networks. White youth in these metro areas, on the other hand, are more likely to enjoy the benefits of their families’ own larger incomes, as well as broader neighborhood advantages—good schools, convenient transport to jobs, a rich array of extracurricular activities, and proximity to other adults with valuable contacts and connections.

The study by Chetty et al. also speaks to the previously mentioned incarceration rates of black boys and men as well as the gender gap in achievement outcomes among black young people. One example is black women’s higher college attendance rates compared to white males, conditional on parental income. Our research corroborates these gender differences within the black population, and this difference is apparent as early as the 16–24 age range. The gap in youth disconnection rates between men and women is largest for black youth. Nationally the rate is 5.9 percentage points higher for black men than black women. In the Philadelphia metro area, the male-female gap is nearly 10 percentage points.

The racial and ethnic gaps in youth disconnection rates today are testaments to the historical truth of discriminatory practices in the United States, as well as mechanisms by which inequality is perpetuated in the here and now. Policies that aim to improve outcomes for youth and reconnect them to mainstream society will need to address the roots of disconnection cultivated years earlier.

Underfunded schools have left too many young people unprepared for today’s job market and without the adult guidance and support they need to succeed. Public transportation that skirts around rather than serves low-income communities makes it logistically and financially hard to reach educational, training, and employment opportunities. Residential segregation by race and ethnicity as well as by education and income—the legacy of discriminatory laws and policies—means that too many young people are growing up in neighborhoods weighed down by concentrated, multigenerational poverty, where adults also struggle with connection to work and school, where exposure to violence limits human flourishing, and where youth disconnection is so entrenched as to be normative. And the disproportionate institutionalization of youth of color continues apace at a time when overall incarceration is declining, creating yet another set of barriers.

Solutions are needed that cross these previously fractured systems—schools, criminal justice, banks and lending, philanthropy—and there are excellent local organizations showing that doing so works. It’s also crucial to include youth in their own solutions and engage them in the conversation to create change. The participation of young people in recent workshops and discussions Measure of America has been involved in has revealed often-overlooked issues around trust and transparency. Data can be our guide, helping organizations working to address the problems facing youth to effect real, lasting improvements. We imagine a day where national economic growth lifts everyone up collectively, but know that much work lies ahead.

1 More than a Million Reasons for Hope analyzes youth disconnection in the United States by more than race and gender, revealing important disparities—and developments—geographically. Accompanying the full report is an interactive data tool, where users can explore the data with maps and visualizations.