A New Way to Measure the Economy

Who Will Provide for the Providers? 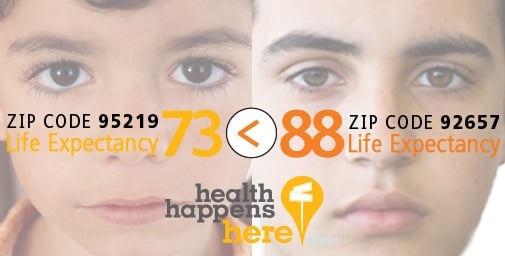 Last year, Measure of America published A Portrait of California, which examines the well-being of California residents using the American Human Development Index (AHDI). This research was supported by a consortium of organizations hoping to stimulate dialogue and action to address challenges facing California today.

The study, which has already been well-received within the academic and philanthropic communities and is a frequently quoted source for the media, has now become the basis for a California-wide public health campaign.

One of the first steps involved in calculating the AHDI for California was to determine the life expectancy for people living in each and every neighborhood and county group, using raw data from the California Department of Public Health.

Measure of America’s life expectancy calculations are the only ones available for small geographies in California and as such, were among the novel and unique contributions of A Portrait of California.

The Health Happens Here campaign uses poignant images of young Californians alongside life expectancy estimates from A Portrait of California to powerfully illustrate the wide gaps in health outcomes that exist between communities within the state. This video, produced by the California Endowment, speaks to how the campaign is using data from the report to motivate people across the state to see connections between social and environmental conditions in their communities and the kinds of health challenges they face as a result.

In the public health community, understanding of these “social determinants of health” is growing. The World Health Organization defines this term as, “the circumstances in which people are born, grow up, live, work and age, and the systems put in place to deal with illness.” It is now important to find ways of conveying this concept to the general population. The Health Happens Here campaign holds great potential to raise awareness among communities throughout California that although doctors and medicines are vital once you are sick, the conditions of our daily lives hold the key to better health and greater longevity. Furthermore, these images draw public attention to inequalities in living standards and health outcomes among California residents, thus encouraging policy makers to target and ameliorate these disparities.

Measure of America is proud to have been involved in The California Endowment’s Health Happens Here campaign through their work on A Portrait of California and is looking forward to the positive impact it will have within the state of California.

What Can Mississippi Learn From Iran?

A Tale of Two Cities, and Two Life Expectancies