A Tale of Two City Council Districts: The Importance of Disaggregated Data to Accurately Measure SDGs in the United States

A Portrait of Los Angeles County 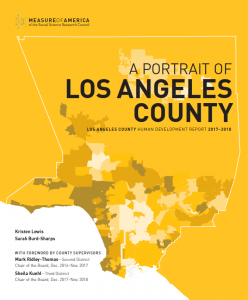 A Portrait of Los Angeles County is an exploration of how LA County residents are faring in terms of well-being and equity. It examines well-being and access to opportunity using the human development framework and index, presenting American Human Development (HD) Index scores for LA County places and demographic groups and exploring a range of critical issues, including health, education, living standards, environmental justice, housing, homelessness, violence, and inequality.

The American Human Development Index, a supplement to the gross domestic product and other money metrics, tells the story of how ordinary people are doing. The index is based on the Human Development Index developed by the United Nations, the gold standard for measuring the well-being of people in every nation. This report is the fifth that Measure of America has produced on the state of California; previous reports include A Portrait of Marin, A Portrait of Sonoma County, and two volumes of A Portrait of California.

For this report, a ranked index has been calculated for 106 cities and unincorporated areas in LA County as well as the thirty-five community plan areas within the City of Los Angeles; for major racial and ethnic groups; for women and men; and for US- and foreign-born LA County residents.

Shoring up the foundations of well-being for all county residents as well as building on the strengths and expanding the opportunities of the groups that are struggling today is key to a flourishing LA County tomorrow. The report thus concludes with an ambitious goal: to increase well-being for all county residents and narrow the gaps between groups, resulting in a one-point increase in the HD Index, from today’s 5.43 to 6.43, by 2025.

To achieve this goal in a way that results in measurable well-being improvements for all, with a focus on the county’s most vulnerable residents, the following areas are priorities: