Commissioned by the Marin Community Foundation (MCF), A Portrait of Marin: Marin County Human Development Report 2012 was launched with a community conversation on January 18, 2012 in Marin, California. Donor and Advisory Panel 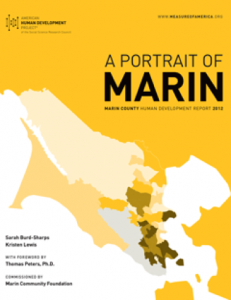 Some Marinites are enjoying extraordinarily high levels of well-being and access to opportunity, while others are experiencing levels of health, education, and standard of living that prevailed in the nation three decades ago. At the top of the rankings is Ross (HDI: 9.70), with the Canal area of San Rafael scoring the lowest (HDI: 3.18), below that of West Virginia, the lowest ranked state. Rankings are provided for the major racial and ethnic groups, men and women, and Marin’s fifty-one census tracts for which there are reliable U.S Census data.

A Portrait of Marin highlights actions that Marinites can take to lock in human development successes today while setting the stage for significant budget savings and improved well-being tomorrow. These include creating an environment that reduces health risks; investing in preschool, and addressing the lower per-pupil spending in schools whose students have greatest needs; and expanding affordably priced housing to increase options for older adults and working families and to reduce Marin’s car congestion and pollution.