Measure of America co-director Sarah Burd-Sharps will speak at the World Affairs Council’s annual conference on the critical global issues we face today. Featured keynote speakers will be Fareed Zakaria of CNN and Chris Anderson, Editor of Wired. Read more

Ron Kaye: Holiday Philanthropy is Vital in Time of Cutbacks

Hundreds of Thousands of Youth in Metro Area Adrift: Report 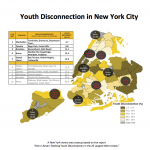 Following our “One in Seven” research on disconnected youth, we have taken a closer look at the 55 Census-defined neighborhoods of NYC. Which neighborhoods in each borough are doing best? Which struggle the most with youth disconnection—young people ages 16 to 24 who are neither in school nor working? Find out here.

An Inside Look at the Middle-Class Squeeze

In the News: CPS Grads to Get City Hiring Preference

Get Your Life Together: Study Shows Black And Latino Youth Are Most “Disconnected” In America, Unemployed, Not In School